Besides family and friends, Cary Academy and Japan have influenced my life more than anything else. Combining the two of them was a lot of fun for me and a very special experience and tour of Japan to plan! After the line below this paragraph, the rest of this report on our trip to Japan is written by Katie Taylor, a 6th grade teacher at Cary Academy and Japan enthusiast.  Check out Katie’s previous posts about our time in Tokyo  and also in Kyoto if you haven’t read it yet! 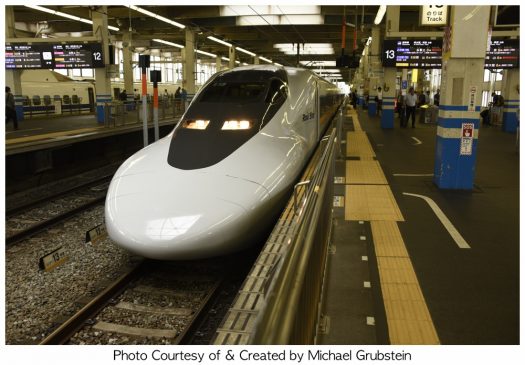 From Tokyo, we traveled by shinkansen, the famed bullet trains, to Hiroshima. Our hotel there was connected to the station, so it was an easy indoor walk past the shops and restaurants in the station. It’s hard to describe the quality of subway and train stations in Japan. They’re clean (really clean), safe, and have lots of access to quality shopping. It can be kind of hard to find your way around in the stations if you don’t know any Japanese, but luckily the signs most relevant to tourists will also have English or at least the Romanized Japanese that is more accessible to foreigners. I wasn’t ever scared to get lost, as I figured worst case scenario I could walk up to someone and say the name of the hotel since it was connected to the station. Two of our student travelers and I had a fun morning trying to find a Mr. Donut in the station and ended up buying an assortment of breakfast items and some souvenir cookies at a convenience store.

Miyajima is a small tourist spot near Hiroshima that is famous for the 1000-year-old shrine named after the island it sits on, Itsukushima. The shrine itself and its famous torii appear to float. (The shrine is basically built on a pier or dock and the torii’s actual base is often hidden by the tide, so neither actually floats.) The view from the shrine back to the mainland is particularly beautiful, as you can see through the torii to the coastline and mountains beyond. All of us, but the students especially, loved the deer on Miyajima. No, you’re not supposed to pet them, as they can be aggressive. We saw one deer chewing on another tourist’s clothing and chasing after her bag of snacks. However, this didn’t stop us from petting them a little bit and taking entirely too many selfies with them. 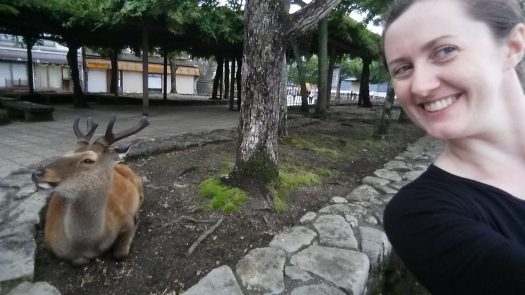 The shrine is right on a beach, and we had fun walking around looking for shells and sea glass. One of the best things about traveling with teenagers is that they ask interesting questions. We asked our guide the next day about several large pieces of driftwood that we saw at the shrine, and she told us that they were kept at the shrine because of the Japanese belief about ancient objects from nature being imbued with strong spirits. 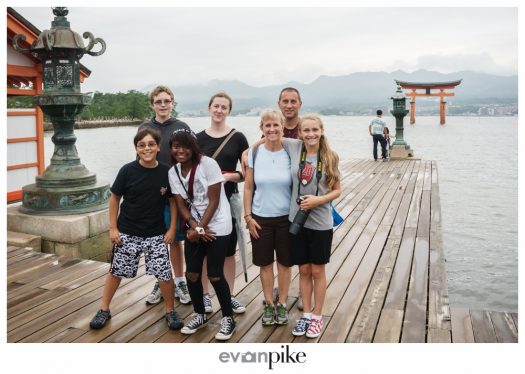 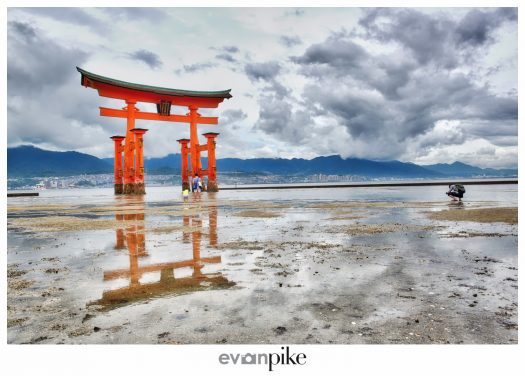 When the US dropped the bomb on Hiroshima in 1945, it detonated in the air directly above what was then the city of town and the prefectural government center. The building which housed the government offices, like a town hall, was gutted but did not fall down. It looks as if the dome was rebuilt later, but it wasn’t. The dome of the building was still intact in 1945, and the building remains today as a monument to peace and a reminder of the horror of war. Visitors can walk around it and spend time thinking or meditating at several spots nearby. A large park sits near the dome, as well as a museum that is similar in tone and contents to the Holocaust Museum in Washington, D.C. It was a very difficult and sobering visit. The students connected with the story of Sadako, and I was surprised to learn that they weren’t familiar with her story. We’ll definitely read it before our next visit. It’s hard to say a lot more about this part of our trip because it feels like a visit to a sacred space. The museum has an excellent website with pictures of the artifacts it holds. http://www.pcf.city.hiroshima.jp/virtual/index_e.html 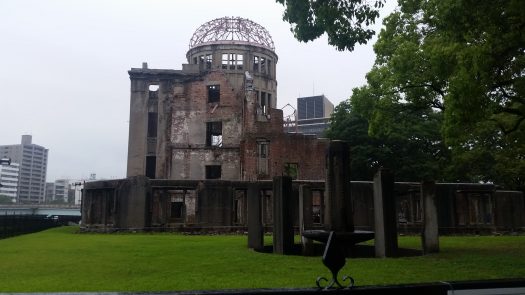 After the Peace Park and lunch, we visited Hiroshima Castle and a famous “shrunken scenery” garden nearby. Hiroshima Castle was rebuilt after the bomb, but is still located in the same place where it originally stood from the 1500s until 1945. The tower was rebuilt as a tourist destination in the late 1950s. Like most castles in the Japan, the interior of the tower is a museum with exhibits about and artifacts from samurai-era Japan. There is a lovely view of the castle grounds and the town from the top. We particularly enjoyed seeing a hawk from above as he (or she) sat in a tree next to the castle tower moat. 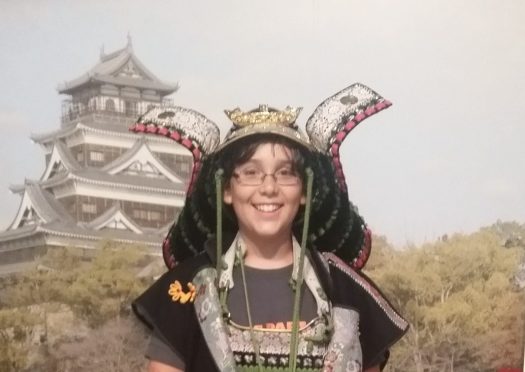 The garden was one of my favorite places that we visited, as well as a favorite of the students. “Shrunken scenery” does not mean miniature trees or plants, but the garden is meant to be a miniature version of the landscape or scenery of Japan. The landscaping is designed to mimic the mountains, forests, lakes, rivers, beaches, pastures, and other common scenes in Japan. Visiting this garden is supposed to be like visiting the entire country of Japan in one go. The group enjoyed seeing the beautiful koi fish in the pond, passing by the tiny rice fields and tea groves, and learning about how the daimyo (feudal lord) visited this garden to have privacy. The garden is beautiful and serene, but it is also a sad and somber place to visit because it was also the final resting place of dozens of people in 1945. People sought relief from their traumatic burns in the lake in the center of the garden, and their remains were discovered when the lake was being redone years later. A small concrete bridge in the shape of an arch remains from the time before the blast and is visible in pictures from the time immediately following the bombing. 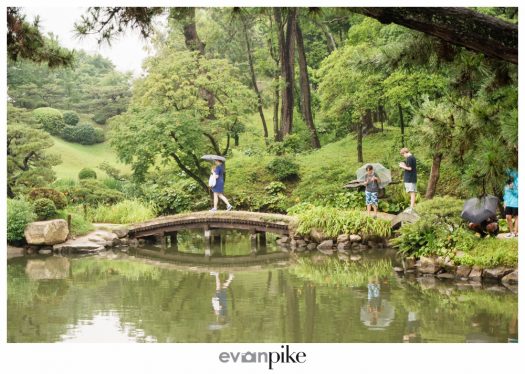 Most places in Japan have a signature food item (or ten) that tourists will try when visiting, and many of these items will be offered in attractive gift-giving packages in souvenir shops and convenience stores. In Hiroshima and Miyajima, I noticed oysters, Seto lemon, and momiji manju in pretty much every store. The kids loved the “momiji manju”, which are jam-filled, maple leaf shaped cakes that come in lots of different flavors. The maple leaf shape is significant because of the famous maple tree forests and parks around Hiroshima, particularly on Miyajima Island. One student bought a package of Seto lemon custard cookies, which were a big hit. He wasn’t sure what the flavor would be exactly, but he knew he wasn’t allergic to anything and decided to go for it. (That attitude tends to be the best one to have in convenience stores in Japan: Avoid your allergies, but otherwise just try something and see what you think.) Seto lemons are grown near Hiroshima on islands in the Seto Inland Sea, and are a little less sour than the lemons I’m used to. I liked the Seto lemon yogurt that our hotel restaurant served.

We also visited a restaurant in Hiroshima famous for its okonomiyaki, which is prepared in a unique way in Japan. Some restaurants here in the US (and Japan too) refer to Tokyo style okonomiyaki as “Japanese pizza”, but you couldn’t really use that description for Hiroshima okonomiyaki. The base is the same kind of simple crepe dough that you’ll find in Tokyo, but thinner, then lots of cabbage and noodles are added, and everything is grilled on a hot, flat griddle, before it’s finished off with Hiroshima style okono sauce. Depending on your mood for the day, you can add eggs, pork, cheese, oysters, shrimp, or lots of other fillings and toppings. It’s fun to sit at the main griddle and watch the chefs work, but all the tables at the restaurant we visited had a small griddle to keep the dish warm while you ate.

Up next our final stop, Kyoto!